The last 2 weeks have been a bit draining to say the least.  If you don’t follow Tyrese on FB or IG, or you haven’t been on any gossip sites, then you’re not aware of the craziness that’s taken place.  So Tyrese Gibson (singer, songwriter, actor, rapper, author) has pretty much spiraled out of control over the past 2-3 weeks, and it has been non-stop, and for the entire world to see.  Apparently there were some child abuse allegations that his ex wife/baby mama made about their daughter.  She’s claiming that Tyrese has beat her on multiple occasions.  So until they had the trial, he was unable to see his daughter for 2 months or so.  This is where social media comes in, because he’s been airing his dirty laundry not only with the issues about his court case, but also about the Rock (Dwayne Johnson), and pretty much everything else going on in his life.  On quite a few IG posts he attacks “The Rock” because he decided to do a spin-off from the Fast and Furious movies. 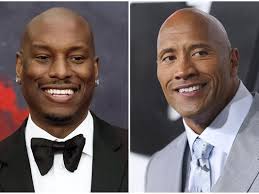 What confuses me most about these attacks is, Tyrese is a grown ass man, who happens to have Dwayne’s personal cell phone number (because they USED to be friends), so I fell that a simply text or phone call would’ve sufficed? But what bothers me most is the fact that he constantly contradicts himself in EVERY post he puts up.  He’ll have 2 posts up about God and being positive and mature, then turn around and have 4 posts up throwing subliminal jabs at The Rock.

Make up your mind dude, either you guys are friends or you’re not, but don’t continue to act juvenile about his decision to do a spin-off, when you have bigger fish to fry.  If I haven’t seen my child in 2 months when I’m used to seeing her on consistent basis, then I don’t have time to worry about anyone/anything else.  My main focus is her and only her.  But I don’t think Ty is seeing the big picture right now.

Then it happens, the day that he completely broke down and teared up informing millions of fans and onlookers that he has no money, the lawyer fees are adding up and his child support is up to $13,000 a month.  The video goes viral, and he is teased by celebrities as well as everyone else on the planet.  Some people stated that he should “man up and stop crying, this happens everyday”.  I had no issues with how he reacted, he is indeed a father, so if he feels attacked (by the ex-wife) and wants to be around his child I don’t see the problem.  Especially since I grew up in a fatherless home, if I hear any story about a father that actually WANTS to see his child and enjoys their company, I’m all for it.  I just don’t think everyone on social media needs to know every aspect of your life, it can become overwhelming for the person sharing. 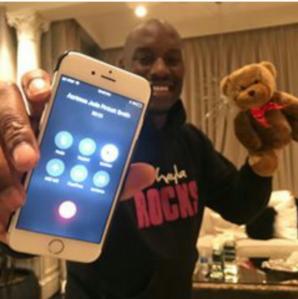 Speaking of over sharing, the icing on the cake (when I officially realized he needs serious help), he stated that he received 5 million dollars from Will & Jada Pinkett Smith, for not only his lawyers fees, but so he can stay off of social media, because they were concerned about his well being and state of mind.  So what does Tyrese do?  He put up the above photo and informs the entire world of what he WASN’T supposed to do.  That was when I realized that it wasn’t funny anymore, something really is wrong, and he needs to not only stay off of social media, but he needs to talk with someone who can help with whatever he’s going through.  Also I’m a little concerned as to why he not only spelled the word “actress” wrong (look closely), but that he felt to include that word at all.  I mean how many Jada Pinkett Smith’s does he know?  No need to include that specific word if you claim that she is a dear friend.  Just saying

I want the old Tyrese back, the one who could sing you out ya panties, who would crack jokes, the author, the one who would flash that beautiful smile at any given minute,  and just hang out with his daughter.  But this philosophical, narcissist, addict, mental/manic Tyrese that we have now, I’m honestly concerned for.

What do you guys think?